Liposuction versus Liposculpture; what does the terminology mean?

How are these different and how does it affect the patient?

Some of these terms are just jargonising; for example suction assisted lipoplasty(SAL) is just a more technical way of saying liposuction.

Others indicate a philosophy or mind-set of the surgeon performing the procedure. For instance, liposculpture generally indicates a higher level of planning, execution and results compared to liposuction.

The other terms (tumescent, ultrasonic, vaser and PAL) relate to the technical aspects of how the procedure is performed.

The terms liposuction and SAL can be applied to all forms of liposuction. However, when plastic surgeons first started regularly performing liposuction in the 1960’s, it was thought enough just to remove fat. This was achieved by attaching a hollow metal tube with at first sharp and later blunt holes (the ‘cannula’) to a vacuum device via rubber tubing. The cannula was placed into the layer of fat underneath the skin of the patient (subcutaneous fat) via a small one cm scalpel incision through the skin, ideally hidden in a skin crease, old scar or junction between two anatomical areas. Fat was sucked into the cannula by a combination of the physical activity of the surgeon moving the cannula back and forth inside the patient’s subcutaneous fat and the suction created by the vacuum device.

Care was taken to avoid removing too much superficial fat, to minimise ridging of the skin and to preserve the skin’s blood supply. However removing fat without reference to a person’s desired 3D shape, skin shrinkage or the contributions of ‘deep’ versus ‘superficial’ fat, led to many of the results of this surgery being suboptimal. In particular, loose skin, shapeless forms, inadequate results and sagging of the remaining fat was common.

The concept of liposculpture was introduced to draw both clinicians’ and patients’ attentions to the fact that, to achieve optimal results,a person’s overall desired 3D shape should be taken into account when performing liposuction. Fat should be removed as if sculpting a block of marble, revealing the beauty within.

In particular deep fat became recognised as the ‘foundations’ of a person’s fat shape.The older technique of just removing the deep fat lead to superficial fat and skin sagging as the supporting foundations had been removed or weakened. This is particularly important in the posterior thigh.

The best results were actually being seen by surgeons who were quite aggressive in removing superficial fat and preserved more of the foundation deeper fat, whilst keeping a picture of the patient’s overall desired 3D shape in mind.

A particularly important concept in liposculpture is paying attention to skin shrinkage. Although it is often thought that patients under the age of 35 will generally experience skin shrinkage no matter what procedure you perform, this is not always the case. Conditions when the skin may not automatically shrink for patients under the age of 35 include where a patient has already experienced significant fat loss through either a prior liposuction procedure or general weight loss, or where a patient has ‘stretch marks’ (the condition where the elastic fibres in the skin have broken). Over the age of 35 it is still possible to obtain reasonable skin shrinkage by adopting techniques which encourage the skin to shrink and by avoiding techniques that stretch the skin. In particular, traditional liposuction technology can be very effective in encouraging skin shrinkage when it involves the application of a narrow cannula very superficially in the direction that shrinkage is desired. Using these techniques I have achieved good skin shrinkage in patients up to the age of 59.

Accordingly, while liposuction just refers to the removal of fat via a cannula attached to a suction device, ‘liposculpture’ is the form of liposuction where the fat is removed, but in a way that builds the patient’s desired 3D shape, respects the contributions of superficial and deep fat to this 3D shape and the importance of skin take up or shrinkage in achieving optimal results. 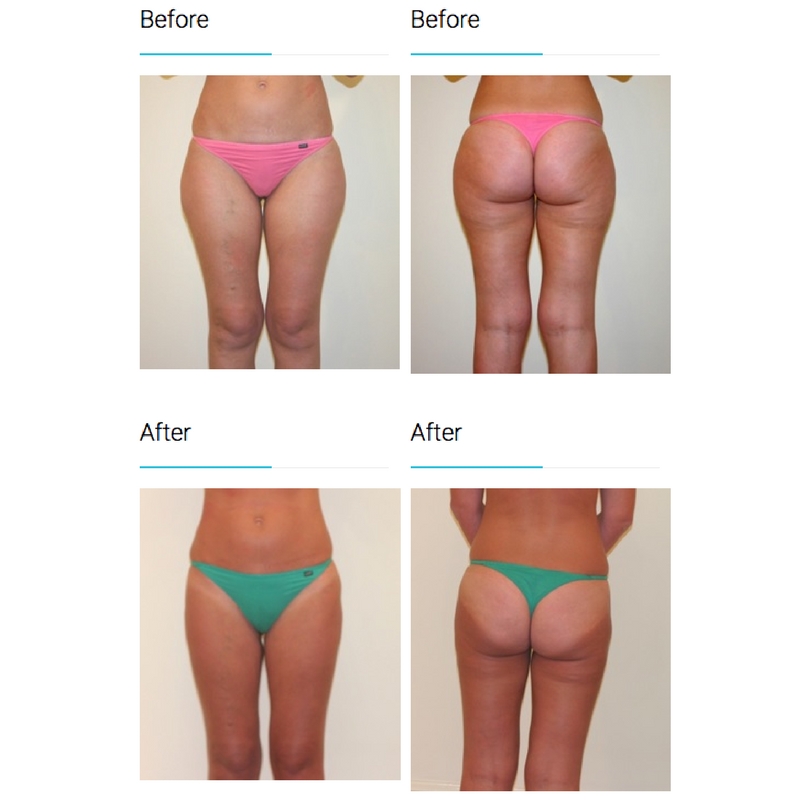 The next ‘development’ was tumescent liposuction. Somecall it a development, but I personally believe quite strongly that it was a backwards step, negating the developments of liposculpture whilst adding in additional risks for patients.

In tumescent liposuction the ‘operator’ injects the patient with a solution containing adrenaline, local anaesthetic and an enzyme to dissolve fat (hylase). This solution is then left to sit for seven minutes prior to sucking out the fat with a cannula attached to a vacuum device. The ‘operator’ estimates the volume of fat to be removed and typically injects up to three times this amount of ‘tumescent solution’.

This highlights my first concern with this technique. As noted above, developments in liposculpture highlighted the importance of getting the skin to shrink post-surgery to achieve optimal results. Why would you then first want to stretch it out by injecting fluid to three times the volume that you are hoping to remove? How is stretching the skin first going to help it to shrink? This initial skin stretching alone is counter-productive to our aims and enough to avoid this technique.

My second concern with the tumescent technique also comes from injecting three times the volume you want to remove. By the time it has sat for seven minutes with the hylase dissolving the connections that hold the fat in place, you end up with a variable mixture of fat and solution (which varies from patient to patient). So when you suck the fat out, how much of what you remove is fat and how much is the injected solution? Having first blown the patient up like a balloon with this large amount of fluid, how does the surgeon then imagine the 3D shape they are trying to sculpt? When do they stop? When they do stop, how much of what remains in the patient is actually their fat that will give the final shape, and how much is fluid that will disappear in the next 24 hours? And does the hylase dissolve the boundaries between the superficial and deep fat, altering the foundations of shape?

In my view, I do not believe a surgeon can perform liposculpture using the tumescent technique and deliver optimal results, as it is detrimental to skin take up and shrinkage, it distorts the shape of the patient, and the surgeon performing the procedure cannot see how much fat or fluid is left behind and therefore cannot determine the end point.

I am not prepared to put my patients at this level of risk.

The ultrasonic liposuction device is similar to the traditional cannula, but with an ultrasonic generator at the tip of the cannula which ‘melts’ the fat, making it easier to remove. In some ways this is similar to melting a block of butter in a microwave oven. However, it also causes heat damage to the skin and the blood vessels supplying the skin, as well as the fat itself. If the surgeon cuts into tissues that have been subject to ultrasonic liposuction (for example, when performing some liposuction in combination with a tummy tuck) then the heat damaged blood vessels are easily seen.

When the skin dies as a result of ultrasonic liposuction, resulting in a burn wound, it is a very difficult burn wound to heal, as the surrounding tissues have been damaged by the direct heat and blood vessel loss. In my view the disadvantages outweigh the advantages of this procedure.

In order to minimise the heat damage, it is recommended to use a lot of infiltration (i.e. be tumescent) when performing ultrasonic liposuction. This then introduces all the problems of tumescent liposuction as discussed above. The other technique to minimise heat damage is to keep the tip moving so that one area does not heat up too much. However this makes it difficult to achieve optimal results because it prevents the surgeon from being able to concentrate on a particular area. The vaser has been designed to try and overcome these difficulties of ultrasonic liposuction, by having fluid spraying out of the tip of the cannula infront of the ultrasonic device. This incorporates an extra degree of weight and attachments to the device making it more cumbersome to direct. It also adds several degrees of unnecessary complexity, which equates to more potential issues. In my hands, I believe I can achieve better results with conventional liposculpture, with less risk to the patient.

Power assisted liposuction (PAL) is a technique where the cannula has some moving parts and a motor that causes fat to be actively ‘cut’ out rather than just sucked out. It has the main advantage of being less physically demanding for the surgeon. The downside is only slight in that there is a marginal loss of ‘feel’ for the surgeon. I have not come across any particular downsides or upsides of this device. It is a technique that I sometimes use, although I do generally prefer the feel of the more traditional cannula in my hands.

In summary, I prefer performing liposculpture with a traditional cannula and no tumescence. By using this technique I find I can provide excellent results for patients, in the safest, most cost efficient manner.

The Perfect Breast AugmentationLiposuction: is surgery better than non-surgical techniques?

Doctors save leg by foot transplant